For it is by grace you have been saved, through faith- and this not from yourselves, it is the gift of God- not by works, so that no one can boast.
© Nicole 2 comments:

Keep your servant also from hidden sins; may they not rule over me. Then I will be blameless, inocent of great transgression. May the words of m mouth and the meditations of my heart be pleasing in your sight, O Lord, my Rock and my Redeemer.
© Nicole No comments:

Maggie, over at My Utopia (who, if you didn't catch it, is my lil' sister), posted last week about some songs and the lies they feed us. Only, when looking at them in context, maybe they all aren't such lies. After reading HER POST, I've got new motivation to listen to the lyrics (and I mean really listen) to my favorite songs and what they mean. I suggest you do the same.
I also suggest you read HER POST, because its really pretty good.
© Nicole 1 comment:

how can death look so beautiful? 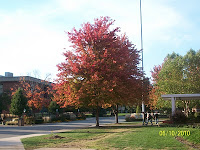 the leaves are dying. not a quick, or silent death either. its prolonged, and slow. Each day a little of their green life is sucked out of them, and they shout in pain. their pain looks like yellow, and orange, and red, and brown. and sometimes when they are half dead, they fall. they land gently enough on the cool, hard ground- only to be trampled on by un-noticing flip-flops, tennis shoes, boots, and high heals. 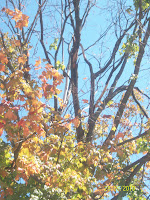 yet, though I know that the tree's only friends for the past seven months straight (who have always been there for the tree, who have never thought to leave) the poor tree's only friends are dying (preparing to leave the tree all alone, hoping that someday the tree will at least have new friends. Which, most likely it will, but how can the poor leaves know for sure) they are dying, slowly, painfully- I know all this, yet I can't help myself in thinking the leaves are beautiful. 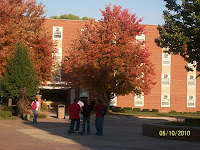 some trees have such stark contrast against the clear blue fall sky, their yellow leaves seeming to pop. some seem elegant, and classic, because their deep orange and the tree's brown give it that air. Some seem Stately, and Important, and Dignified- that's the only way I can think to describe the deep burgundy and red leaves. Some leaves seem confused, childish, (and more beautiful, somehow) because they have some of each color in almost every leaf. Some trees seem to glow, the burgundy on the outermost leaves, and an orange color closer to the tree's life source (I think these are called Maple). some trees have already begun to mourn, already they have lost their friends. 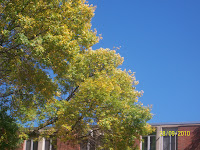 But they've been through this before, the poor trees. (is pain worse because you knew it was coming?). They knew it was coming, they knew their happy, hydrated green friends would die away at some point. But they know to be patient and wait until spring when new leaves will come to live. The trees try not to think about loosing these friends, it would be altogether too much. And to keep the leaves from being afraid, the trees won't tell them what is coming. It would be too much for their little hearts. 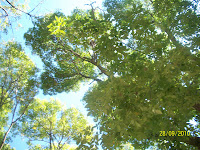 but now, as i look out my window and as i walk to class, i can't help but think that these fall leaves are beautiful. 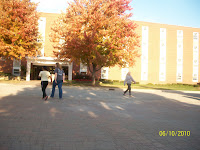 why does it seem that as soon as I find a blog I like and start following it, they stop posting??

My roommate and I have a ton of plans- its going to be a great weekend.

One of those plans was for me to read to her while she drove. I was going to read from her favorite seriese. So, today I stopped by the library to check out the book. I've figured out the campus' system for shelving books- quite a bit different from what I'm used to, so I knew exactly where to find the books. But I get to the right section, and the book isn't there. Its already been checked out!

So much for plans.

We ended up making a stop at a store for a gift. Across the isle were a bunch of books for sale. We looked hopefully, and sure enough it was! We bought it, and within a few minutes of the trip I was reading aloud, trying not to stumble over words I had never seen, and trying to read fluently. And, for those of you who don't know, when there are words you don't know, and you've never read the text before, reading fluently can be quite a task.

But I managed. And my roommate was gracious, not getting impatient as I tried to sound out words like a third grader. So far, I've read for two hours to her. And loved it!

I love reading out loud...
© Nicole No comments:

This is what the Lord says:


"let not the wise man boast of his wisdom, or the strong man boast of his strength or the rich man boast of his riches, but let him who boasts boast about this: that he understands and knows me, that I am the Lord, who exercises kindness, justice, and righteousness on earth, for in these I delight"

declares the Lord.
© Nicole No comments:

Shout with joy to God, all the earth! Sing the glory of his name; make his praise glorious! Say to God "How awesome are your deeds! So great is your power that your enemies cringe before you. All the earth bows down to you, they sing praise to you, they sing praise to your name." Selah Come and listen, all you who fear God. Let me tell you what he has done for me.
© Nicole No comments: