Last Thursday, Friday and Saturday I spent on the campus of Olivet Nazarene University where I will be attending in the fall.

Thursday was CLEP testing day, and a very interesting one at that. My dad and I had to leave at 6:15 am to get to the school in time for my 7:30 am test. The earliest test they offered. The ONLY one I was taking. But having all that time Thursday was good because it gave me a little more time to get used to the campus.

(I have been to the campus numerous times for all kinds of events, but I never really learned my way around. There was always someone with me who knew exactly where we were going, so I would blindly follow them :) )

The rest of orientation went pretty well... I met my room mate; they had everyone play late night games; I registered for my fall classes; I got into all the classes I wanted to; I know my way around campus a lot better now; my room mate and I got our second choice dorm; although my phone almost died searching for service, it didn't; and I am becoming more and more excited about going to school there.

Four of my friends are also going to Olivet, and two were there early on Thursday too, so we hung out. One of them was taking 4/5th of the CLEP tests, so the other girl and I spent a lot of time in the testing building waiting to find out how she did.

There was another kid in the hall where we were who was reading 'Catcher in the Rye'. I overheard him telling someone that his school had them read it a couple years ago, but he didn't really like the book then, and now he was giving the book another chance.

Well, of all the books to give a second chance! Personally, I would be fine if I never had to read it again.

But it reminded me of a 'book' I read this last semester in school. We read a few snippets from Gulliver's Travels, and I really felt bored by it. I mean, the snippets we read were all narrative, and I didn't understand a lot of the satire...

When we grazed over Swift's book like that, I had decided that this summer I would read the whole thing. But I kept putting it off. I knew that there was no dialogue, and that I wouldn't get most of the satire. I had tried a couple times, but I never got past the first three chapters.

What books have you been putting off giving a second chance? Or even a first chance?
© Nicole No comments: 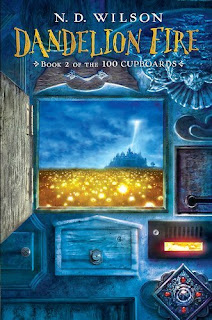 I read Dandelion Fire a couple months ago, but for some reason I never actually posted my review of it... there are actually quite a few books that fall into that category. I am thinking of implementing a new rule for myself; I cant start reading a new book until I have posted my review of the one I just finished. (we'll see how long that lasts :D )

Dandelion Fire is a sequel to 100 Cupboards, and a very good one at that. I don't know what to say, I have so much praise for it! Some things that happen are so unpredictable, but everything that happens is just perfect. Once again N. D. Wilson had me reading 100 miles an hour on the edge of my seat.

Henry is still staying with his Uncle, Aunt, and cousins in Kansas, but he gets a letter saying he has to come home soon. His parents are getting a divorce and there will be a lot to sort out. And Henry isn't sure he wants to go home... there was still so much he wanted to do! And then one day when he is outside just before a Thunderstorm he sees a dandelion that seems to glow as if it was on fire, and how he goes blind... so many things happen I am having a hard time trying to touch on them all! But something happens... Henry finds out where he is from and who he really is. His uncle learns a few things too...
© Nicole 3 comments: 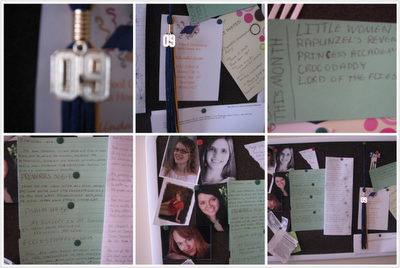 This is the cork board in my room as of the end of May:
© Nicole 3 comments: