Don't let anyone look down on you because you are young, but set an example for the believers in speech, in life, in love, in faith and in purity.

Come, Thou Fount of Every Blessing

Come, Thou Fount of Every Blessing
words by Robers Robinson

Come Thou Font of every blessing,
Tune my heart to sing Thy grace.
Streams of mercy, never ceasing,
Call for songs of loudest praise.
Teach me some melodious sonnet,
Sung by flaming tongues above.
Praise the mount! I'm fixed upon it,
Mount of God's unchanging love.

Here I raise my Ebenezer*
Hither by Thy help I'm come.
And I hope, by Thy good pleasure,
Safely to arrive at home.
Jesus sought me when a stranger,
Wandering from the fold of God.
He, to rescue me from danger,
Interposed His precious blood.

O to grace how great a debtor
Daily I'm constrained to be!
Let that grace, now like a fetter,
Bind my yielded heart to Thee.
Let me know Thee in Thy fullness;
Guide me by Thy mighty hand
Till, transformed, in Tine own image,
In Thy presence I shall stand.

* According to I Samuel 7:12, a stone commemorating God's deliverance of His people; literally, 'stone of help'
© Nicole No comments:

In the midst of the cold.
of the gray, blank sky,
of the stiff, tired earth,
the brown grass,
the bare trees...
the winter
there is green.
It is hidden,
on a windowsill,
on my windowsill,
in two separate pots.
Two different plants,
living,
and green.
In moist black dirt
sitting, waiting for the sun
to break through the clouds
so they can feast, grow, and stay green.
silent
but present
two plants remind me
that this dreary emptiness
will pass;
that
this frostbitten winter
will not last
forever
but that spring will come again
and there will be more
green.
Written by Marie DeVries
© Nicole 2 comments:

Alice in Wonderland by Lewis Carroll

I decided to read 'Alice in Wonderland' because of Lewis Carroll; the author. See, his birthday was today, so I thought it would be fun to have read one of his works in honor of it.

I'm not sure what I had been expecting when I picked up 'Alice in Wonderland', but it was NOT what I read. I'd seen the Disney movie. My High School had done a play. I've heard plenty of allutions to the book... but these things weren't even good mirrors of the book.

UnBirthdays? Nope.
A Caterpillar blowing smoke in letter forms? Nope.
But Alice's neck stretches super long at one point, and when she talks about her cat, everyone runs away.

However, some things were the same: the never ending tea party; the Cheshire Cat; the White Rabbit who was late; 'eat me'; 'drink me'; the Queen of hearts; "OFF WITH HER HEAD!!!

Alice sees a rabbit and decides to follow it into its rabbit hole. She finds herself in quite a predicament, and until the end of the story something is always happening. More often than not, she eats or drinks the food and beverages of this strange place and part or all of her grows or shrinks. She meets the most interesting people here, and I think the majority of her problems come from a 'language barrier'... I mean, words spoken by Alice or one of her acquaintances are miss heard for a homophone or have a different meaning out of context, and there is a lot of confusion all around.

" " Would you tell me, please, which way I ought to walk from here?"
"That depends a good deal on where you want to get to," said the Cat.
"I don't much care where--" said Alice.
"Then it doesn't matter which way you walk," said the Cat.
"--so long as I get somewhere,"Alice added as an explanation.
"Oh, you're sure to do that," said the Cat, "If you only walk long enough." "

When the heat of the summer
Made drowsy the land,
A dragon-fly came
And sat on my hand,
With its blue jointed body,
And wings like spun glass,
It lit on my fingers
As though they were grass. 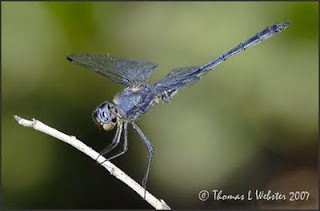 28And we know that in all things God works for the good of those who love him, who have been called according to his purpose.... If God is for us, who can be against us?

A Wind in the Door by Madeleine L' Engel 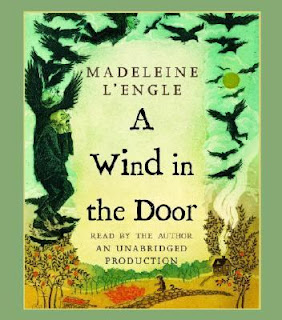 (sequel to 'A Wrinkle in Time'- quickly reviewed here. It is the seventh book mentioned)

In my review of 'A Wrinkle in Time' I talked a little about how the worldview presented was confusing to me, and the same goes for this book. So I wont bother re-typing everything- you can read it HERE though. Aside from that, I only had a couple qualms with the book. First, there were a lot of biological terms and circumstances that pulled me out of the story- it was hard to stay focused on the story when I am wondering what-in-the-world-does-that-term-mean??? and when some situations are completely unrealistic. Second, I really really don't like the main character, Meg. She cries too much, doesn't want to do anything hard, is stubborn, selfish, and self-pittying. I found myself only rooting for her because in order for Calvin and Charles Wallace to win (which I REALLY wanted) Meg had to, too.

However, I couldn't stop. I had to keep listing to the book. So, in the end L'Engel succeded.
© Nicole 4 comments:

The LORD is my strength and my shield, my heart trusts in him, and I am helped.

-Obeying your alarm clock
-Keeping your room clean (or, at least an organized mess)
-Not reading a book when you really really really want to

I got my ARC of The Chestnut King by N.D. Wilson today (provided by Random House Children's Books click here for the RHCB page for the 100 cupboards series).

It is sitting on my desk to my right, with a little blue post-it note at the beginning of Chapter 2.
I couldn't help myself.
But I had to stop there. I have other things I have to do before I can read! I have to look over class notes, go to another class, and clean up the dorm a little... I just want to start reading!
If I'm lucky, I'll be able to start by 3' Oclock... if I'm lucky. And then I'll have to be careful not to read through supper...
© Nicole 1 comment: 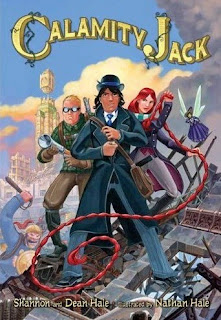 I was super excited about this sequel to Rapunzel's Revenge, and I've got to say I am satisfied with it.

Calamity Jack, by Shannon and Dean Hale, and illustrated by Nathan Hale, (follow the links to visit their sites!!!) is a middle-grade graphic novel. The book begins before Rapunzel's Revenge, depicts a few highlights of the first book, and then from page 40- 144 the new adventure begins.

When Jack last left town, he was fleeing for his life because of what happened with the Giant Beanstalk. Now that he and 'Punzie' are back, the town is in horrible shape, and the giants are helping them battle off the giant beetles that continue to attack the towns. Will Jack, Rapunzel, and their new friend Freddie be able to figure out what is really going on and be able to stop it?

You'll have to read the book to find out!

visit these other blogs for more information about Calamity Jack:

I narrowed down my favorite books to only five. Well, one of them is a five book series so technically I'm at nine books. Here they are:

Anne of Avonlae by L.M. Montgomery
Percy Jackson Series by Rick Riordan
-The Lightning Thief
-The Sea of Monsters
-The Titans Curse
-The Battle of the Labyrinth
-The Last Olympian
Calamity Jack by Shannon and Dean Hale
The Celebration of Discipline by Richard J. Foster
Pride and Prejudice by Jane Austin 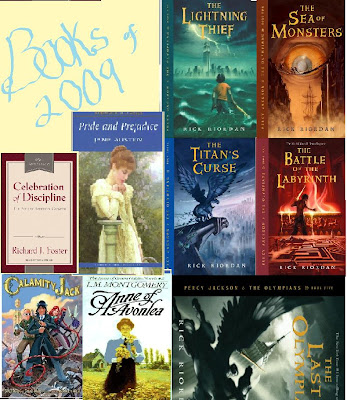 Christmas Break is drawing to a close. Tomorrow I pack my belongings and move back into my dorm. It was weird to 'move in' to my room again after months of living at school, and now it is weird to move out again.

I listened to four books in the first week or so of this new year:

A Wind in the Door by Madelein L 'Engel


I've read from a few non-fictions as well: 'Seven Reasons You Can Trust the Bible' and 'Eat this Book'


I made a plot change in my novel, and I can't believe it took me this many years of editing (yes, years) to stumble upon this new idea.

This year I look forward to reading from the pile of books I've accumulated, and to getting closer to finishing my novel.

Here's to the new year!
© Nicole No comments: