Savvy is the story of how Mibs got her savvy, what it was, and what it caused. The Beaumonts live in a stretch of land that they call ‘Nabransas’ on some days and ‘Kansaska’ on others. Almost right away Poppa, who has a mermaid tattoo, is involved in a ten car pile up. If this was not bad enough, it happens two days before Mibs’s special thirteenth birthday. All the children in her family on her mother’s side got their savvies on their thirteenth birthday. The preachers wife decides to throw a party for Mibs while her mother and oldest brother, Rocket, are in a hospital in Salina with Poppa. Mibs leaves the party because she believes she knows what her savvy is. Mibs thinks she can wake people up- the perfect thing to help Poppa out of a comma! She stows away on a pink bus; her brother Fish follows, and so do the preacher’s kids, Bobbie and Will Jr. . To their surprise, Mibs’s youngest brother Samson is already on the bus…They realize the mess they are in when the bus goes in the opposite direction of the hospital.
© Nicole No comments:

Mibs is Fish’s younger sister. Fish is a very protective brother; he cares a lot for the safety and comfort of Mibs and Samson. When Mibs begins to hear Will’s thoughts through the sun drawn in pen on his hand, she shouts at him to wash it off.

“Fish… looked up at my face in the window. He looked at me screaming and plugging my ears and at the tears dripping like the kitchen tap down my cheeks…My brother took one last look up from that simple doodle to my sorry, sorry self framed inside the broken window. Then, understanding that my upset must have something to do with the unexpected things that happen when a turns thirteen, Fish did what he had to do. Still holding tight to Will’s wrist, Fish worked his mouth for one long second, then spat a big, thick wad of juicy spit right into Will Junior’s hand… Will tried to pull his hand away, but Fish held on tight, smearing the spit in and around to mix with the ink until there was nothing left but a great messy smudge…” (107-109).

Fish does what he needs to do before asking questions. “Fish may no have known precisely why he’d needed to get that ink doodle off Will Junior’s hand, but he’d known it was important to me, and I was grateful” (109-110). There are more times during their adventure where Fish has the best interests of Mibs and Samson in mind and he does his best to take action. This connection between brother and sister makes life easier for Mibs. She does not have to do everything on her own, and she cannot. Without Fish and his protecting shield over his younger siblings this story would be lacking.

Mibs is the main character who is about to get her savvy. At first she wants one that will let her blow fires out halfway across the state, or give her x-ray vision, or let her run really fast, or breath underwater. As she finds out about her Poppa and the terrible accident he was in, she decides all she wants for her thirteenth birthday is a savvy that can help him. She thinks that it is up to her and she has to get to the hospital and save her poppa, all by herself. By the end of her adventure, she realizes that she needs help from other people, and that she cannot master her savvy without help.

The symbol used in this story is an Angel. Several angels appear different times, and Mibs likes each one better than the one before it. One angel is in the beginning, one throughout the middle, and another through the end.
The fist angel belongs to the preacher’s wife. It’s a “smiling angel air freshener dangling in the front window” of her van (17). Mibs does not like this angel because 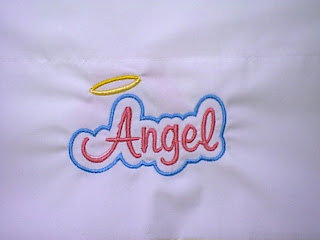 she does no really like its owner. The adjective ‘smiling’ creates an image of an indifferent creature who cannot care.

The second angel is tattooed onto Bobbie’s back. “the tattoo was a picture of a little angel with a golden halo and outstretched wings, only this angel had a devilish grin and a pointed red tail to match” (52). At first Mibs does not really like Bobbie, but through the story they gain a kind of understanding of each other, and it even looks like a friendship

The third and last angel Mibs finds on her adventure is not even a real angel. This last one is a figurative angel, someone Mibs claims must be one. Mibs describes her as “a lighthearted lady with no tattoos” (137). Mibs really likes Lill. Lill represents comfort and even acts a little like her Momma. Mibs says “For a minute I though maybe Lill might be an angel sent to look after us… not a devil-tailed angel like Bobbi’s tattoo, nor a heavily perfumed and sappy-smiling angel like the air freshener hanging in the front window of Miss Rosemary’s minivan. A real angel. One with really big feet” (143).
© Nicole No comments:

This is a charming novel. I don't quite know how to describe it, but the best I can do is to say that it's alive.

It’s not a novel for those seeking high-strung adventure and things of that sort. Don't get me wrong, it is NOT dull and boring. In fact, I could scarcely put it down!

Celia's House is about the Dunne Family. They live in the Scottish country in the early 1900's. Old Aunt Celia wants her house to go to her grand-nephew, Humphrey, when she is gone. (It is quite funny, actually, because no one else really knows this, everyone else assumes that it is going to her nephew.) In order for Humphrey to get Dunnian, he has to leave the estate to his daughter, Celia; and not to his eldest son Mark. There is a slight problem... there is no Celia.

Old Aunt Celia knew this, and she was not crazy, either. Humphrey agreed to her terms, knowing his wife, and three children would live it at Dunnian, eventually. He felt sure that could produce this Celia. In fact, by the end of 1910, they have a total of five children, and an extra.

Deb is that extra. She was Old Aunt Celia's sister's daughter (if that makes any sense), and when Deb's mother gets re-married she leaves Deb to live with Alice and Humphrey.

It was so exciting to watch Mark grow up. To see him about seven years old when he was first living at Dunnian, and then later when he was in his twenties putting on an amateur play of A Midsummer’s Night Dream, and then when he gets married... it was bitter-sweet seeing is grow up right before my eyes. Going though all kinds of troubles, and then remember the young child he had once been, telling Johnson that his Mummy would pay for the apple, or thinking that the old woman on the stairs had been a Miss Terry...

the lines of this Novel flowed, the are filled with excitement, longing, sorrow, and hints of comedy. I don't know how I went so long without reading it!

Alright, I finished The Silver Chair by CS Lewis, and this quote is stuck in my head. I thought that it was funny, and I thought that I would share it with all of you. It is said about a centaur by a dwarf, and goes like this:

"'why, Son of Adam, don't you understand? A centaur has a man-stomach and a horse-stomach. And of course both want breakfast. So first of all he has porridge and pavenders and kidneys and bacon and omelet and cold ham and toast and marmalade and coffee and beer. And after that he attends the the horse part of himself by grazing for an hour or so and finishing up with a hot mash, some oats and a bag of sugar. That's why it's such a serious thing to ask a centaur to stay for the week-end. A very serious thing indeed.'" 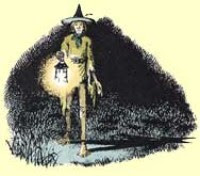 I got to thinking, after I did a challenge on another blog, about Puddleglum. He is a Marshwiggle from the Marshes in Narnia. He first shows up in The Silver Chair by C.S. Lewis. I do believe he is one of my favorite characters! So, here are my top 15 Puddleglum-ish quotes.

-“What is it? Is the king dead? Has an enemy landed in Narnia? Is it a flood? Or dragons?”

-“Good morning Guests” he said. “Though when I say good I don’t mean it wont probably turn to rain or it might be snow, or fog, or thunder. You didn’t get any sleep, I daresay.”

-“Now… those eels will take a mortal long time to cook, and either of you might faint with hunger before they’re done."

-“…but I’d better not tell you that story. It might lower your spirits, and that’s a thing I never do.'

-“Very likely, what with enemies, and mountains, and rivers to cross, and losing our way, and next to nothing to eat, and sore feet, we’ll hardly notice the weather.”

-“Now a job like this-a journey up north just as winter’s beginning, looking for a Prince that probably isn’t there, by way of a ruined city that no one has ever seen-will be just the thing."

-“The bright side of it is… that if we break our necks getting down the cliff, then we’re safe from being drowned in the river.”

-“This’ll be a test, you see. If I curl up, or burst, or turn into a lizard, or something, then you’ll know not to take anything they offer you.”

-“We’ll never see it again, I shouldn’t wonder. You may have blotted it out and turned it dark like this, for all I know. Nothing more likely.”

-“That’s it, Sir… Unless it should happen to be the end of the whole world.”

-“Not much chance of being burnt. That’s the bright side of it,” observed Puddleglum, pointing to their right. There, hardly a hundred yards away, lapping against the walls of the houses, was the water."

-“Those lamps will give out in five minutes, I shouldn’t wonder.”

-“Nothing worth talking about has happened to me. I want to hear the news. Don’t try breaking it to me gently for I'd rather have it all at once. Has the king been shipwrecked? Any forest fires? No wars on the Calormen boarder? Or a few dragons, I shouldn’t wonder?”

-“Not much chance of that I should say… I don’t reckon I’m very likely to see my old wigwam again, either. And that Prince- he’s a nice chap- but do you think he’s very strong? Constitution ruined with living underground, I shouldn’t wonder…”

-“He'll want to have the leg off at the knee, I shouldn’t wonder. You see if he doesn’t."

-“Don’t cry out before you’re hurt or you will be hurt, see?”

So far, March holds the record of the most books I have read in a month: a total of 10.
© Nicole 2 comments: