Kreature. And the Unforgivable Curses

I just finished the last Harry Potter book.
Overall, I must say I really enjoyed them. Of course there were parts I didn't like, but unless I am the author I think that will be the case for every book.

Forewarnging. Just about everything in this post is a spoiler. So, if you havn't read Harry Potter and the Deathly Hallows, and you plan to, don't read further until you have. Thanks.

Two things stood out to me in this last book.
House elves are usually treated very poorly in the wizard-ing world.They are like little slaves who can't disobey their Master's orders without punishing themselves. So, many wizards take advantage of this, and treat the elves very poorly.

One house elf is named Kreature. Harry inherited this little elf, much to his dismay. Kreature's previous master was pretty cruel, never really caring for the elf. And the elf responded. Kreature had the nastiest angriest attitude both towards his previous master, and then to Harry.

But, a good ways into the book, Harry begins treating Kreature better, for Hermiony's sake. And again, Kreature responds. The transformation is unbelievable! Kreature is a whole new elf, and has a loyalty towards Harry, even beyond the magical one.

Now, for the second thing I noticed.

This is a problem I have with the book. Something I really really really wish Rowling hadn't done.
There are these three curses in the magical world that are worse than any other. They are the unforgivable curses, and a wizard who uses them generally goes to the Dementors in Azcaban. One of them is the tourture curse, the other is the mind control curse, and the last one is the killing curse.

It is presented as if the only way Harry and his friends can accomplish their goal is for him to use the mind control curse several times. Even Professor McGonagall uses one of the curses.

I do not like that Rowling included this. There has to be another way to get Harry and his friends to 'win', even if it would take more work and thought to think of another solution.

So, those are my most pressing thoughts.

My roommate and I are going with a group of friends tonight to watch the midnight premiere of Deathly Hallows (part 1), and I am uber excited! Tinged with a little nervousness as to what they are going to change.

I am trying to learn a version of this song on the piano.

I get to teach two reading lessons to my Field Experience class, and the little reading the Teacher gave me is about these.

I love this painting.
oh, and this one too!

I am into crocheting. I've made a blanket, scarf, fingerless glove, 1 sock, and a Bible case in the past two months. I have yarn to make another scarf, and more yarn for more fingerless gloves.

I rediscovered Newsboys this weekend. There are several songs I refellinlove with, and these are some of them:
Your Love Is Better Than Life
Something Beautiful
Wherever We Go
Shine

Since the first day of NaNoWriMo, I have not added ANY words to my novel. Hopefully I'll have time this week, because I really like the plot line.

We watched this video in my Intro To Fine Arts class... its kinda creepy, and kinda cool
© Nicole 2 comments:

Harry Potter and Order of the Pheonix by J. K. Rowling 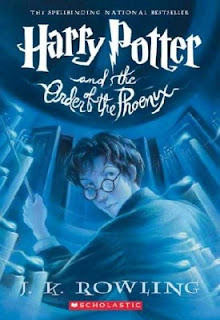 The plot has thickened, and Harry has a ton more responsibility in and at the end of this book. I liked that we got to see Ron get some special treatment (thought I wish he would have used his power a little more), and Hermione grew a bit too. I also appreciated the new dimension and growth given to some of the supporting characters.

But, parts of Harry bugs me. Sure, he is only 15, and sure he has some right to be upset, but it seems to me he overreacts quite a bit. Maybe its because I'm so much older than he is (okay, less than 5 years older, but still. Thats a lot of time), and things that are a big deal to him aren't a big deal to me. Maybe its because I've never experienced anything like what he went through in this book that I don't understand. Either way, Harry seems to have some anger management issues.

Also. Some of the characters discussed a bit about how he likes to be the hero. At first, I didn't agree with them. I thought it was a good quality  to want to save endangered lives. And its not like he looked for these opportunities. But although I disagree with them about that, I see a different flaw. I don't think its bad that he wants to keep what is left of his family and friends, but he keeps trying to do it alone or nearly alone. He doesn't do this solely because he thinks they wont really be any help, but because he doesn't think he needs the extra help. And thats a problem. He gets so cuaght up in wantig to save lives, he doesn't stop to consider his plans, or anything for that matter. He just rushes into things feet and wand first, mind last.

And its never good to leave your mind behind.

In the next few books, I hope for some growth. I hope Harry learns to control his emotions, and think before he acts. I hope Hermione figures out how to use her knowledge and recall abilities to fight Lord V. , and how to properly use her influence. And I hope Ron learns to stand up, make his oppinion known, and to stand up for it.

As a side note, I'd love to hear what you, my readers, think about the treatment of house elves to this point.