I've liked mysteries for as long as I can remember.


I collected The Three Cousins Detective Club books, vowed to read the library's Boxcar Children mysteries collection and  inhaled Encyclopedia Brown. I made treasure hunts for my sisters and created clues for them to follow. I watched Diagnosis Murder, Murder She Wrote, Mattlock, and so on.

More recently, I've read many of Agatha Christie's, and watched NCIS and NCIS LA. And even more recently my sister introduced me to Castle.

(When I began listing all these books and shows, I realized I might have a problem... it's hard to ignore it with all these links...)

But I don't watch every mystery show out there. I have some restraint. Plus, there are some I can't stand.

I was young when I started watching Diagnoses Murder, and I remember distinctly the episode that freaked me out and made me stop watching. In that particular episode, the victim had been killed through a poisoned energy drink.

It's the same reason I'm having difficulties deciding if I like the show Castle. It's too real.

In NCIS and NCIS LA they're dealing with military problems, and terrorists, and things very far removed from my everyday life. When the energy drink gets poisoned, when the neighbor or husband murders, when a civilian tries to do the right thing and gets killed, it's just too real. It feeds my imagination too much, and I can freak myself out.

There has to be at least one clean show out there that's about solving mysteries, not murders.
Is that too much to ask for?

Email ThisBlogThis!Share to TwitterShare to FacebookShare to Pinterest
Labels: musings, story from my life

They Never Came to Rivendell

I am reading The Lord of the Rings. It took some time getting started, but I love the prose, the characters, and the world Tolkien created. Last week while I sat there with the book in my hands I came to a part that made me pause.


"they missed a dark and dangerous journey. But they also never came to Rivendell." (From, Tolkien's The Fellowship of the Ring, Chapter 11 'A Knife in the Dark').

He's talking about the ponies. The Bad Guys let them loose so the Hobbits and Strider would have a difficult time leaving town, and Tolkien says the ponies were lucky because they got out of the adventure before it became serious and life-threatening. 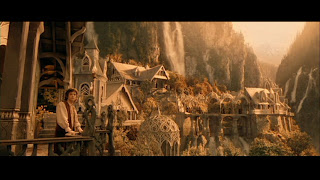 But he doesn't leave it at that. He adds the sad little clause that they also never made it to Rivendell. You almost feel bad for the ponies. Sure, they had a nice easy life-- but they never came to Rivendell.

The Hobbits, on the other hand, withstood the 'dark and dangerous journey' and got to rest in Rivendell.

Much Much Too Busy for You

I'm applying for jobs, I'm  working at the library, I've got my nose in four or five books, and I'm working through some content in my own manuscripts.
So, dear blog and readers, I'm posting briefly with a veggie tales song that came to mind.
I suppose this makes me not a good neighbor?

(skip to about 45 seconds into the song)

I first heard of the book Kenny and the Dragon during summer reading last year. For the first few weeks I was able to sit in during story time and hear the first chapters of the story. But then there were several weeks when I did not sit in, and I missed the middle and end of the story. Several months later, I found the book at a thrift store and snatched it up eager to find out what happened. I finally picked it up and finished the story a couple weeks ago.

There is a mouse family who farms and has sheep. The son, Kenny, reads a lot. He does not always distinguish between non-fiction and fantasy. His father finds a dragon on their land, Kenny finds it, learns his name, Grahame, and discovers that Grahame isn't like other dragons. But the town finds out there is a dragon and wants it killed. And Kenny doesn't know what to do.

It's a kids book, so it obviously has a happy ending, but there's a lot in between that's got merit.

But at the end of the book Kenny mentions a book called The Reluctant Dragon, written by some old English guy. It turns out to be a real book. So I found it and read it, too. I was expecting a long, tedious and over detailed novel, but found a quick read by, you'll never guess, Kenneth Grahame.

Kenny and the Dragon was based on Mr. Grahame's kid's story The Reluctant Dragon. The stories are quite similar except for a few details. Mr. Grahame's story is sandwiched between a few paragraphs on either side about two kids; it is a story their neighbor tells them. The characters are not named, except for St George who comes to slay the dragon.

I liked Mr. Grahame's story as a beginning. It had room for so much more detail and elaboration (ironically, what I feared it would be overflowing with), it felt a bit flat and vague. I liked what Mr. DiTerlizzi did with it in Kenny and the Dragon, but the original story was interesting, too.

What is better? The original, or what someone built off of it? Does originality stop after the initial idea, or does it include what subsequent people add on, out of their own creativity?
© Nicole No comments: