The prospect of anything may induce excitement-- but it is not because of the place or the party itself that you become excited. It is because of the memories of the past, the hopes for the future, the people who will be there. And contrarily, the memories, the people, and our attitude can make it something we dread. It is not the event itself that creates the atmosphere, but what we bring to it.

Atmosphere is not substantial. The music, the decorations, the people; they do not create an atmosphere. Instead, it is our own reactions to those things, those triggers, that create it. Our feelings about them, our memories tied to them, our attitude towards them inspire the atmosphere.

Consider what atmosphere you are creating.
© Nicole No comments:

the friends I've made these last three and a half years of college
sitting down and reading for a few hours for the first time in months
keeping a journal, even though the class requirement is over
having things to do, people to see, places to be
new tea pots and knicknacks
crafty Christmas presents
going for a swim at my school's new recreation center
sketching in new notebooks
sketching on new pages of old sketchbooks
Sunday pot roast
an idea for an unusual Christmas play
Christmas party after Christmas party
singing Karaoke, even though I can't carry a tune

Email ThisBlogThis!Share to TwitterShare to FacebookShare to Pinterest
Labels: making me happy

In A Very Large Nutshell

The first time I really heard of it was when I watched it on TV with my dad. It was the 25th anniversary version, with Alfie Boe as Jean ValJean. We came in part-way through-- at On My Own. I watched in awe. I really had no idea what the plot was, who the characters were-- anything. But multiple times I was nearly moved to tears by the music and lyrics. When it was over, I bought two of the songs on Itunes. 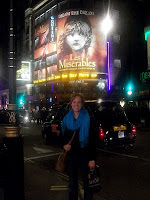 Since then, you could say I'm obsessed.
After several false starts reading it, and upon the recommendation from Noel, I got it on audible. I finally finished it (60 hours) last week
Just about a year ago, I saw it in London, at the Queen's Theater. What an experience!
I saw a high school production of it, too.
I went to a voice recital on campus and it was wonderful just to hear it sung.
I plan to see it in theaters. Maybe more than once...

The story itself, though, is so sad. So 'miserable'.
Jean Val Jean just keeps acting opposite how everyone expects him to. He honestly cares about many of the other characters more than himself. And he has the strongest conscience of all the characters. And things from his past just keep looming in front of him. I think its a beautiful story about rising above expectations, about doing good even to the extent of sacrificing self, about what is right, and what is wrong even through it is socially acceptable...
It is just wonderful.


For some reason I just can't find it in me to like Cossett. Listening to the whole book actually reinforced this initial dislike. I think it is because I find her childlike, petty and annoying.


And my favorite characters would have to be Enjrolas and Gavrosh. By far.
© Nicole No comments:

Email ThisBlogThis!Share to TwitterShare to FacebookShare to Pinterest
Labels: books, making me happy, musings, story from my life

I was hearing mentions of Mother Theresa nearly every day. after a week of it I got some biographies from the library, and still it continued for another two weeks. I'm amazed that Mother Theresa made the decision to leave her family and country to become a nun when she was only 18 years old. I don't know if my 18 year old self had the courage. I don't know if my 18 year old self was focused enough on God to be sure if He was really calling me to anything or not. Reading about her life, the bits and pieces that led up to how she transformed the world, her childhood homelife was vital to who she became. Really, the things we know her so well for her family was doing when she was a child. Don't underestimate the impact of parents.

Also, I've been reading Prayer by Richard Foster. It is reawakening a longing within myself, deep within myself, in a place I didn't know existed. I crave the intimacy and prayer life that Mr. Foster writes about, and I'm reminded of the times when I had it. But then life continues and is persistently distracting. And I get my priorities all inverted and suddenly I'm replacing my prayer and meditation time with getting my make-up just so, and getting a few minutes more sleep, or watching a movie, or crafting -- or blogging. It's an interesting way to learn that I can do no good in myself, that I need God to move in me. But I've actually got to be open to Him moving. I've got to put myself in positions where He has free reign.

A few weeks ago I found a book that stopped me in my tracks. The title wasn't at all familiar, but the cover art seemed to be. Just by seeing it I knew I had read it before. I had read it over ten years ago, and had been trying to think of the title for quite some time since then. When I saw this book, I knew I had found it. I did not even open it or read a synopsis. I was sure. So I bought it. I will read it soon, and I'm hoping it was one worth remembering.