The Creative Habit, by Twyla Tharp

I've heard that creative people are crazy-- eccentric. I've heard that they get carried away with their projects, are tortured artists and in the end they mess up their lives.

Maybe I read too much fiction.

I'm not sure what to do with that assumption about the person whose livelihood comes from their creativity, not now that I've read Twyla Tharp's book "The Creative Habit: Learn It and Use It For Life." 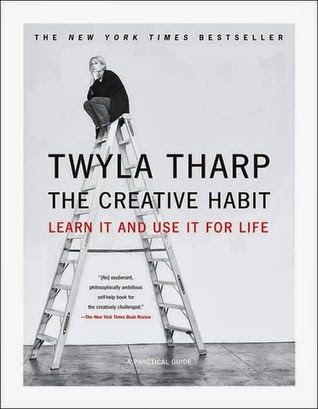 I saw a bit of that strangeness in Twyla through her book and at times it caught me quite off-guard. On the other hand, I was inspired. Don't worry- I most likely wont take the 'tortured artist' route in life. However, I was reminded at length that creativity doesn't just happen, you have to work with it.

Most of Twyla's examples had to do with ballet, since that's her career, but she often made connections for other types of Creatives. For myself, I was reading for ideas on writing, drawing and painting.

What did I come away with? In the case of writing, I was reminded, at length, that a book won't write itself. And it's much, much more than typing words into a document and sending your first thoughts away to a publisher. It's not all fun and games, but having a love for writing sure helps. I'ts like Hemingway said, "There is nothing to writing. All you do is sit down at a typewriter and bleed."

Essentially, Twyla Tharp convinces her reader that if they want to be creative, they have to make it a habit. With the bait established, then, you can tap into the ideas when you want or need them.

I mentioned being inspired. Let me explain: I've tried getting up earlier to do writing exercises and such. I was even using some of the examples and suggestions Twyla Tharp's book is peppered with.

Creative habits are harder than they sound.

And I still haven't gotten around to filling more pages in my writers journal.


But I'm going to keep trying.

Email ThisBlogThis!Share to TwitterShare to FacebookShare to Pinterest
Labels: books, making me happy, musings, story from my life

I used to keep a writers journal.

If I had my way, I would still keep a writers journal, but it is much harder to find time to jot down ideas than you might think.

I enjoy going back and reading old entries, though. They're full of
Snippets of things I've seen or imagined.
Thoughts about plots.
Thoughts about books that I've read than can be applied to books I want to write.

I can never seem
to convince myself to write each day. I'm too busy, too tired, too comfortable with everything I've seen that I don't feel like describing it.

But when I do, sometimes they turn out well.
Like this one:

Powdery snow looks like a flour coating.
...
The villain makes promises and they are empty, merely bait.

For a long time ,it seems as if evil will win. It seems as if good has no hope of survival and the world will be overtaken with blackness and despair. At this point, many desert to save themselves. The good who still stand against the evil may not have hope of winning. They fight and stand on the principle of the matter, accepting they may be silenced, imprisoned, killed. But they will not defect.

When you see the size and strength of the approaching enemy and your eyes widen, your stomach sinks, but somehow your heart hardens and your resolve rises.
...
Yellow: the color on the evergreen shrub in the sunlight. The color of the stripes in a Tiger Lilly flower. Of the slides at Northview Park, the stripe on the flag, the title of the book.

I should have learned it by now: Hard work now pays off later. You might not want to do it, but you should. That's what I learned, looking back on that certain July 15th and my reflections.

Be diligent. It pays off.

Email ThisBlogThis!Share to TwitterShare to FacebookShare to Pinterest
Labels: making me happy, musings, pictures, story from my life

They say that when you practice, you'll become perfect.

I haven't found this to be true. 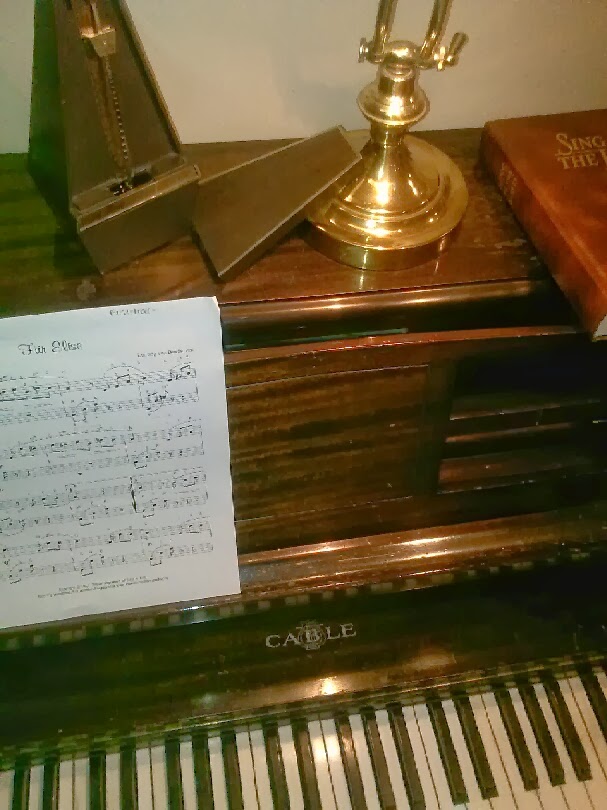 Once, I was practicing a song on the piano. I can't read notes and I don't know which keys are which, but I wanted to learn a particular song so I tried. I agonized over the notes, counting up and down the lines and spaces, running through the alphabet. Then, I pecked the keys trying to get the piano to sound like the song.

I thought I was doing marvelously!

Then my sister, who does know piano, and how to read notes, and which keys are which, came over to me.

"What's that supposed to me?" I scoffed.

"It does too. Leave me alone, I'm practicing."

She wouldn't go. "Play it again," she said. She watched my hands and glanced up at my sheet music as I played. "You're supposed to play a flat for all those notes."

"The black key. That's what that symbol at the beginning of the song means."
I tried it her way, and it worked. But I'd practiced it so many times the wrong way it took a very long time to unlearn what I'd practiced.

So, you've got to practice right to get better.

And we've got to start somewhere!
So start by practicing right. Not to become perfect, but to become better. To become good.

Email ThisBlogThis!Share to TwitterShare to FacebookShare to Pinterest
Labels: freewrite, musings, story from my life

Take Solomon's Word For It

Have you ever received something worth more than gold and silver, without even asking for it?
Proverbs claims that Wisdom is more valuable than gold.
Why so valuable? Proverbs (again.) promises that Wisdom will protect us (help us make good decisions) and honor us (help others make good decisions). And all it takes is being wise? 'Well', I thought. 'Sign me up for this!'
But, sorry to be the bearer of bad news, Wisdom is not one of those valuable things you are given, without even asking for it.
It takes work.
Solomon asked for Wisdom, and God gave it to him, yet even for him it wasn't that easy.
God gave him Wisdom, but Ecclesiastes shows us that quite a lot of it came from experience. In Proverbs, our dear friend Solomon says you have to get it.
He doesn't say hope for Wisdom.
He doesn't say ask for Wisdom.
He doesn't say wait for Wisdom.
Solomon advises us to get Wisdom.
He tells us to be active about it, not passive.
You have to work for Wisdom.
And then you have to work to keep her.
Solomon tells us Wisdom will protect and watch over us-- if we do not forsake her and if we love her (Proverbs 4:6). She will exalt and honor us-- if we cherish and embrace her (Proverbs 4:8 emphasis mine)
These (not forsake, love, cherish, embrace) are things that take effort.
I used to avoid hard work, inventing all sorts of excuses. But a couple of years ago I realized that hard work is rewarding. There is nothing quite like a satisfied exhaustion. When you know you worked hard and accomplished a lot and are very tired now, but you have confidence that your work was very purposeful.
Working for Wisdom is like that-- hard work, but satisfying.
© Nicole No comments:

You Just Can't Compare Them

One day, several years ago, I brought plain paper to the art museum. In the past I had been content gazing at the masterpieces, but today I was eager to capture them myself. I sat myself down on a bench in front of Degas' Ballet Dancers and just looking at it I knew I wouldn't sketch the whole thing. So I focused just on one dancer hoping to make the ballerina on my page a replica of the one Degas had immortalized in paint. 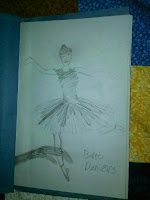 As you can see from the picture I dug out just for you, things didn't go so well. Sure, it's a ballerina, but it isn't even comparable to what inspired it. I couldn't find the exact painting, but this is one that would be similar.

What we humans do compared to what God does is similar to me trying to copy a great painter. Look at the contrast between these two verses:

"Then I considered all that my hands had done and the toil I had expended in doing it, and behold, all was vanity and a striving after wind, and there was nothing to be gained under the sun."

"And God saw everything that he had made, and behold, it was very good."

Now, it doesn't take an expert to realize that 'very good' and 'a striving after wind' are different.

God does things differently than we do, and although what he does may seem bizarre (for example 'instead of attacking that city, march around it without talking.') but I have to admit God's way ends up working while my way doesn't.

We've often got very different ideas about how to get the same result.

And from my experience, and hearing about the experiences of others, I'm going to trust God's way not my own.